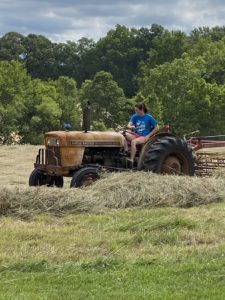 When farms change hands, its a time of vulnerability for the land, and everyone that has a relationship to it. We are so glad Renee Kennedy reached out to us to start a conversation which helped her have the ability and confidence to secure valuable tenants to farm her 110 acres as well as to reduce her property tax burden of owning farmland. We never know who might get connected in this work, and in this case one of the family farm members involved is Cara Smith, current president of of the American Junior Simmental Association! We feel fortunate too, to have been able to meet and interact with the folks involved. Read the full story here. 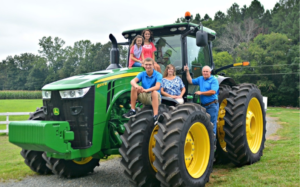 We are proud to have briefly crossed virtual paths with Kevin Mathews of Mathews Family Farms in the Yadkin River Valley in our mission to connect farmers with landowners. Mathews Family Farms recently picked up approximately 13.5 acres of bottomland and 16.5 acres of upland to lease in Forsyth County through a connection with NC FarmLink to an absentee landowner who was looking for someone to farm her land. A lifelong 4th generation farmer, Kevin and his wife Cindy will grow corn, soybeans, and barley on the cropland, adding it to about 6,000 acres of land that they lease and own in the Yadkin River Valley. Read the rest of the article here. 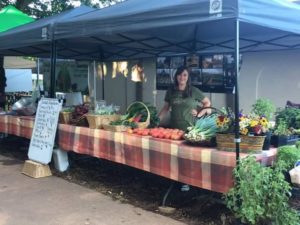 Claudia and Steven Townsend drove the back roads of North Carolina for two years looking for farm lease opportunities they had found on NC FarmLink. When they met Neil and Cindy Shore in Yadkin County, they knew they had found the one; a small house to rent, equipment all in place, and an established market were part of the deal. Not only that, Neil and Cindy offered six generations of farming experience to share. Claudia and Steven just bought a house close to the farm and are getting geared up for the 2020 season growing a large variety of produce for sale at Sanders Ridge Farm and at the Cobblestone Farmers Market. Read the full article about Claudia, Steven, Cindy, and Neil here.

– Will and Savannah Salley of Headwaters Market Garden set up at Southern Appalachian Highlands Conservancy’s Incubator Farm which they found through NC FarmLink. 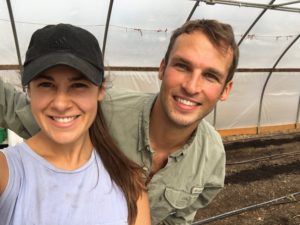 After meeting each other and getting married in Maui, Hawaii in 2014, Will and Savannah sold everything they had, bought one-way tickets to California, bought a car, and drove to western North Carolina where they both have family roots. Will’s grandmother grew up farming peaches around Saluda, NC and Savannah’s father’s family is from the Boone/Deep Gap area. Savannah’s maiden name is Watson, and yes she is kin to legendary guitarist and singer Doc Watson. Read the full article about Will and Savannah here.

– NC State University alum match up with landowner in Montgomery County to realize their farming dream of growing hemp for CBD oil production. 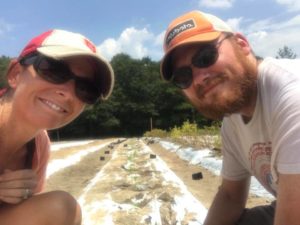 “They aren’t going to make any more land, especially the land you grew up on,” thought Mary Jo Shuping when she recently bought 140-acre Oak Bluff Farm from her grandmother in Montgomery County, NC. A traveling RN at the time, Mary Jo came back to North Carolina from Texas when her father died unexpectedly and bought the family farm from her grandmother who had made up her mind to auction it off. However, Mary Jo currently fills a vital role in the operating room at the Randolph Health Hospital in Asheboro, and she does not have the time or energy to keep the farm productive. Wondering how she might manage the farm, Mary Jo did what we all do when we have questions about what to do next, she got on the internet. NC FarmLink, a program of NC State Extension, was first on the search results when she typed in “rent farmland NC”. Mary Jo created a farm profile on October 25, 2018, and waited to see what would happen.

About an hour away in Apex, NC, John and Jessica Rowe were keeping an eye on the NC FarmLink site to see if the right opportunity would present itself for them to pursue their dream of farming hemp. “When I found NC FarmLink and saw that it was run by NC State Extension I bookmarked it,” noted John. “It’s such a great resource, and just the fact that it was run by NC State Extension was comforting. When we saw Mary Jo’s farm we quickly called her and set up a meeting.”  The three hit it off immediately and commenced to draft a 1-year lease agreement with an option to renew as a starting point for John and Jessica to use the existing greenhouse frames and a four-acre field.

Read the rest of the article about John, Jessica, and Mary Jo here.

– Mark Scearce and Nicole Thoennes of Dharma Creek Farm lease land from the Bondurant family in the Beaverdam Valley of Haywood County. 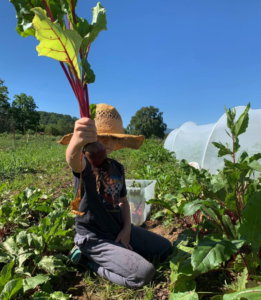 When Mark Scearce and Nicole Thoennes were living in Chicago and Los Angeles writing and performing music for television and advertising, the last place they imagined themselves ending up was to be farming vegetables and flowers in the Beaverdam Valley of Haywood County. Today, Mark and Nicole, who married in 2012, and their two children Nelson (6) and Rose (3), have a bustling business growing vegetables and flowers for their CSA , selling primarily to their customers in Asheville. Mark and Nicole lease 3 acres of prime bottomland from Mr. Bondurant where they operate and manage Dharma Creek Farm. Mark and the landowner found each other on NC FarmLink.

Mark Scearce was kind enough to spend some time with me on the phone to be interviewed for this article. Read the full article here.

– Bernadette Pelissier and Van Bennett match up with Keith and Megan Marshall to farm their 92 acre farm in Cedar Grove on Orange County NC. 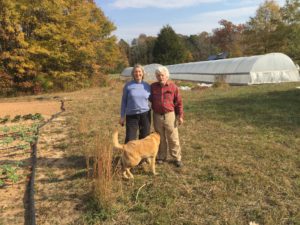 “We bought our 92 acre farm with the intention of putting fallow farmland in Cedar Grove back into production using organic methods and assisting young farmers. We had no idea how many people would respond via NC FarmLink, particularly since we wanted someone who had experience farming. We were so fortunate to find Keith and Megan Marshall, who were an ideal match. Within less than a year they have been very successful: they’re selling their varied produce at markets, to restaurants and to our local food co-op where we shop.”